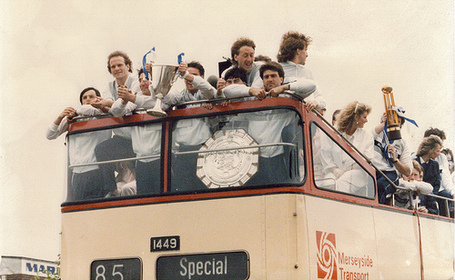 When Gordon Lee was sacked in 1981 little did we know what success his replacement, former player Howard Kendall, would bring to the club. However, Kendall would endure a rocky start to life in the Goodison hot-seat before things improved.

In fact some fans were calling for his sacking when the club made a poor start to the 1983/84 season with the nadir being a 0-0 draw with Coventry City in December in front of under 14,000 fans at Goodison, the majority of whom booed the players from the field. Kendall was on the brink.

A League Cup tie away at Oxford United was not the sort of match Kendall needed as he battled for his job - A defeat to the lower division side probably would have sealed his fate. That looked to be the case with Oxford leading with just a few minutes left. But United defender Kevin Brock unwillingly wrote his name into the Everton history books when he played a backpass blind to his ‘keeper, failing to spot the lurking Adrian Heath. The Toffees striker duly equalised to spare Kendall and his player’s blushes.

To say the club never looked back was an understatement. They lost just three of their last 21 League games to finish seventh in the table, and they reached both the League Cup and FA Cup finals.

The League Cup final finished 0-0 against Mersey rivals Liverpool, though the Reds had the last laugh in the replay.
Thankfully Everton had another chance for Wembley glory in the May against Graham Taylor’s side Watford. Graeme Sharp and Andy Gray (now a commentator for Sky Sports) grabbed a goal in each half to give Everton their fourth FA Cup.

Everton began the season high on confidence following their FA Cup win and duly dispatched Liverpool in the Charity Shield. However, two defeats in their first two games dampened spirits before an away win at Chelsea sent Everton on their way to a run of just one defeat in 20.

The Toffees were rampant in both domestic and European competition and three separate consecutive-winning runs of 10, 9 and 7 games – including a win over Liverpool at Anfield and a 5-0 thumping of Manchester United in consecutive weeks - kept an amazing trophy treble well within the team's grasp.

Their first title since 1970 was secured with five games to spare thanks to a 2-0 win over QPR before the Toffees rolled onto Villa Park where a late Derek Mountfield header in extra time sealed a 2-1 win over Luton and a return to Wembley for the FA Cup Final.

But it was in Europe where the real drama happened....

Everton had reached the semi-final of the European Cup-Winners Cup by overcoming University College Dublin, Inter Bratislava and Fortuna Sittard. They faced Bayern Munich in the last four and after a goalless first leg in Germany they fell 1-0 down at home.

But during the half time break Kendall remained confident that such was the noise reverberating around Goodison the fans behind the Gwlady’s Street goal would ‘suck’ the ball into the net. He wasn’t wrong.

Andy Gray grabbed a quick double to put the Blues in front before Trevor Steven sealed the win late on and sent the crowd in the shaking stadium wild. The match is still considered to be the greatest game ever played at the famous old ground.

Rapid Vienna were the opponents in the final in Rotterdam where goals from Andy Gray, Trevor Steven and Kevin Sheedy gave the Blues a comfortable 3-1 win and their first ever European trophy.

Sadly the FA Cup final against Manchester United proved one step too far and a extra time strike by Norman Whiteside gave Ron Atkinson’s Red Devils the win and denied the Blues a famous treble.

It can’t be denied though that the 1985-85 season was the club’s most successful campaign with the starting XI of: Southall, Stevens, Van den Hauwe, Ratcliffe, Mountfield, Reid, Steven, Gray, Sharp, Bracewell, Sheedy – seen as one of the club’s greatest ever sides.

In all competitions during the 1984-85 season, Everton played 63 matches. They won 43, drew 10 and lost 10. Of the 10 defeats, one was the FA Cup final and three were after the title had already been won!

(ps the below video is more than ten minutes long - but if you're an Everton fan it will be ten minutes well spent!!)

The Class Of 85 Everton FC (via goldenvision63)

The following year was a nearly-season for Everton. Gary Lineker joined from Leicester to replace the departing Andy Gray and duly bagged 38 goals in 52 appearances. But it wasn’t enough as Everton finished second in the league to Liverpool and also lost out to them in the FA Cup Final, despite Lineker giving Everton a first half lead at Wembley.

The trophy drought didn’t last long though as Kendall coped with the departure of Lineker to Barcelona the following summer to fashion another title winning side - making it two league titles, three Charity Shields, an FA Cup and Cup Winners Cup in three years under Kendall.

Sadly the Heysel stadium disaster which saw all English clubs banned from Europe hit Everton hard and the side, starting with Manager Howard Kendall, began to break up.

Kendall wanted to test himself in the European Cup and unable to do that in England left to manage Atletico Bilbao in Spain. His reliable number two Colin Harvey took over but the exodus had already started as star players followed Kendall out of the exit door.

He achieved a fourth place finish in 1988 and reached the FA Cup Final a year later. But on what would normally be joyous occasion the all-Merseyside 1989 FA Cup Final was a sombre one given it was played just weeks after the Hillsborough Stadium disaster which left 96 Reds fans dead. The 3-2 defeat was hard to take but it came on a day where football took second place to other events.