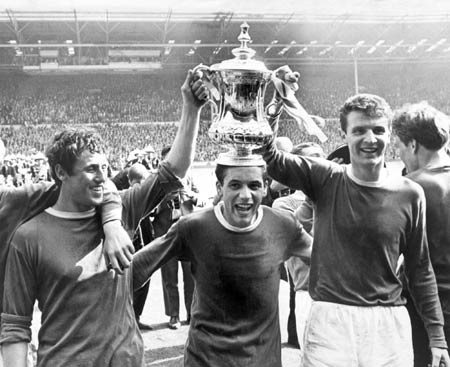 The club had a period of stability in the late 50s as they sought to re-establish themselves as a top flight side. However, as we entered the 60s, the appointment of Harry Catterick as manager transformed the club’s fortunes.

Catterick had played for the club in the 40s and 50s and arrived as a manager determined to build a team that played neat, attractive football.

His appointment proved a masterstroke. After a 4th place finish in his first season Catterick led the club to their sixth league title in 1962-63.

Three years later Catterick took Everton to Wembley for an FA Cup final against Sheffield Wednesday. It proved to be one of the most exciting finals ever with Everton falling two goals behind early on.

Relatively unknown forward Mike Trebilcock then wrote his name into the history books with two goals before Derek Temple completed the comeback to give Everton their third FA Cup.

One of the more unusual firsts for Everton!

When Everton equalised in the 1966 FA Cup final Liverpool born Eddie Cavangah was so overjoyed at the goal he ran onto the pitch towards the celebrating Everton players. The Police on the sidelines, a bit confused as to what to do, belatedly chased after Cavanagh.

But in a scene straight out of keystone cops, when one of them tried to rugby tackle him, Cavanagh merely shrugged off his jacket and left the copper rolling around on the floor!

Eddie did eventually tire though and another Policeman managed to drag him to the ground before leading him off the field – Cavanaghs’s arms still in the air celebrating!

British comedians David Baddiel and Frank Skinner met with Eddie in the early 90s to ‘re-create’ his moment of fame:

Such as was Catterick’s ambition he continued to add to his side with the then British record £110,000 signing of Alan Ball - who became the corner stone in one of the greatest ever Everton teams.

They returned to Wembley two years later but lost out in extra time to West Brom, but two years after that the side became Champions again. The 1969-70 is still seen as one of the finest in Everton’s and indeed English football history.

Catterick had successfully mixed young players coming through the academy such as Joe Royle and John Hurst along with big money buys like Alan Ball.

Ball formed a key partnership in the midfield with Colin Harvey and Howard Kendall – who would both go on to manage the club. Together they were known as the 'holy trinity' as they were at the forefront of Everton’s fine football played during that period

Alan Ball - The greatest of them all?

Toffees fans of a certain age rightly see Ball as one of the greatest players they have ever seen pull on an Everton shirt. His tremendous skill was matched by an infectious enthusiasm for the game which proved an inspiration to his team mates as well as the fans.

The outpouring of emotion when he died three years ago is testament to the high regard he is still held by Evertonians (below are some of the tributes left at the Dixie Dean statue at Goodison and some video tributes). 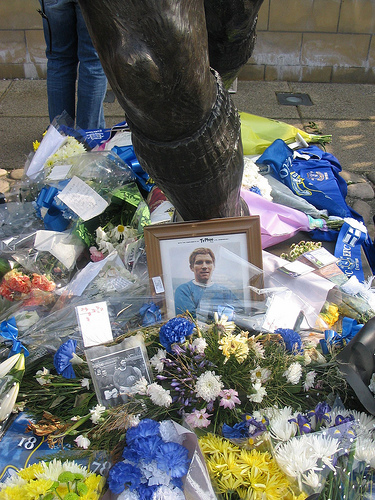 He is also responsible for one of the best quotes in Everton’s history:

"I was running back to the centre circle after I scored the second goal against Liverpool and pure elation welled up inside me. I remember thinking: "I just love this place - I want this place forever."

"Once Everton has touched you nothing will be the same"

Sadly the season after their league triumph Everton tumbled down the table and eventually finished 14th. Catterick’s health then began to falter and in 1974 was replaced by Billy Bingham.

Sadly for Evertonians the rest of 1970s was more notable for the success of the Reds across the park than any silverware at Goodison, though there were a few highlights.

In 1974 Everton shelled out another record fee, this time £350,000 for Birmingham striker Bob Latchford. He would be Everton’s top scorer for six successive seasons and was a cult hero for Evertonian’s of that generation.

He was perhaps most well known for his goalscoring feat in the 1977/78 season. British newspaper the Daily Mail put up a £10,000 prize for the first footballer who could hit 30 goals in that season and Latchford duly obliged – with echoes of Dixie Dean’s famous 60 goal haul 40 years earlier.

Everton did actually come close to winning the league on a few occasions and perhaps history will view this era more kindly in time. But it will always pale into insignificance from what went before it in the 60s and what would come up next in the 1980s....