Everton - A Brief History Part 1 - How It All Began

Share All sharing options for: Everton - A Brief History Part 1 - How It All Began

As you may or not know Everton has a grand history that puts them up there with England’s top clubs. Far too much has happened in the club’s 132 year existence to fit into a single blog. But for those starting out as an Everton fan, here are a few highlights to begin your Everton education:

Everton began life as St Domingo’s in 1878, named after a local Baptist church which encouraged its youngsters to play football in order to keep fit when the cricket season had finished. A year later they adopted the name Everton, which was the district of Liverpool they played in. Ten years after that, with football growing ever popular, they joined with Preston North End, Aston Villa, Wolverhampton Wanderers, Blackburn Rovers, Bolton Wanderers, West Bromwich Albion, Accrington (no relation to Accrington Stanley),Burnley, Derby County, Notts County and Stoke City to form the football league. The first ever league winners in 1888/89 were Preston North End though Eveton were soon in on the act, winning their first title two years later.

The club originally played their football on Stanley Park but with increased interest in the team and large numbers of 'supporters' coming to watch them in action it wa decided in 1882 that they move to somewhere where they could accommodate more fans. They did so by moving to a piece of land on Priory Road. This is the site where Liverpool’s Anfield stadium now stands today.

The club continued to play there until 1892 when a dispute with the land owner, John Houlding, over increased rent saw the club leave Anfield for another plot of land on the other side of Stanley Park. This was to be called Goodison Park, the ground the club continues to play in today.

The remaining players and Houlding decided to form their own club – Liverpool FC. A City-wide rivalry was born and both clubs continue to play their home games with just a small stretch of green Park land separating them (and yes Liverpool would not exist if it wasn't for us - they should be eternally grateful!)

Goodison Park maybe falling to pieces now, but it has a grand history. It was the first major purpose built football stadium to be constructed in England in 1892. It has staged more top-flight football games than any other ground in the United Kingdom and was the only English club ground to host a semi-final at the 1966 FIFA World Cup. It was also the first English ground to have under soil heating and the first to have two tiers on all sides.

The club allegedly got their nick name ‘The Toffees’ from Mother Noblett’s Toffee shop, which was located opposite the lock up tower that features on the club’s badge. To this day a ‘Toffee Lady’ walks around the pitch before the game throwing sweets out to the supporters.

In 1927 the club signed Dixie Dean from another local side Tranmere Rovers. A tall rampaging striker Dean quickly became a hero at Goodison and in the 1927-28 season scored a record 60 goals – a record that still stands today. A statue of Dean still resides outside Goodison Park. He also captained the side to FA Cup glory in 1933 against Manchester City at Wembley. 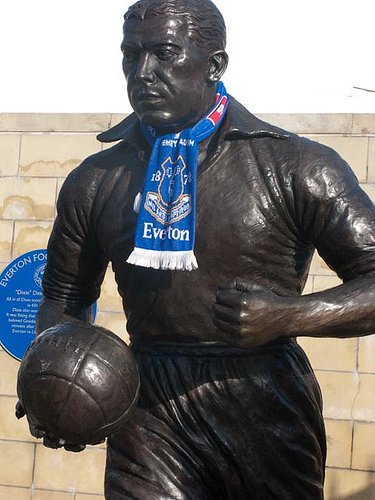 Everton were relegated in 1931 and 1951 but after earning promotion to the top flight in 1954, the club have never been relegated since. They have played more seasons of top flight football than any other team in the country – the 2010/11 season is to be their 108th.