In the second part of my season review I look back on what was the worst point in Everton’s season as a crippling injury list threatened to scupper their entire campaign:

October actually began with a win over in soggy Belarus as the Toffees came from behind to beat BATE Borisov 2-1 thanks to a late Tim Cahill goal, putting them in a commanding position in their Europa League group.

With two home games to follow now should have been the time for Everton to climb the table. But for whatever reason the players were lacklustre in both encounters, seemingly unable to muster enough creativity and energy to break down the stubborn defences of Wolves and Stoke. In the end they had to come from behind on both occasions to grab a 1-1 draw. In the final reckoning those four dropped cost Everton dear.

By now the casualty list had reached epic proportions and a daunting trip to Lisbon to play European giants Benfica became a lot tougher with barely 11 fit players. Young right full back Seamus Coleman made his debut on the left and that unfamiliarity and inexperience showed as he was run ragged by Argentine Angel Di Maria. To be fair on Coleman he wasn’t alone in being out played as the Portuguese side dished out a footballing lesson to the hapless Blues. In the end the score could have been more than 5-0.

Sometimes a game soon after such a heavy defeat can be a good thing, a chance for the players to get things out of their system. But with injuries mounting you got the impression that Moyes and his men just needed some time out to rest and re-group. Sadly for the Toffees the games kept on coming. Bolton was next and despite a cracker from Louis Saha a late Ivan Klasnic goal gave the Trotters a 3-2 win.

The most predictable result of the season? A 2-0 defeat against Spurs in the League Cup, a fixture Everton just could have done without at that stage of the season.The game will only be remembered for the purple strip Everton wore to raise money for Liverpool Unites, a charity set up in memory of young Rhys Jones, who was tragically shot and killed in the Croxteh area of Liverpool August 2007. It was the one positive on an otherwsie gloomy night. 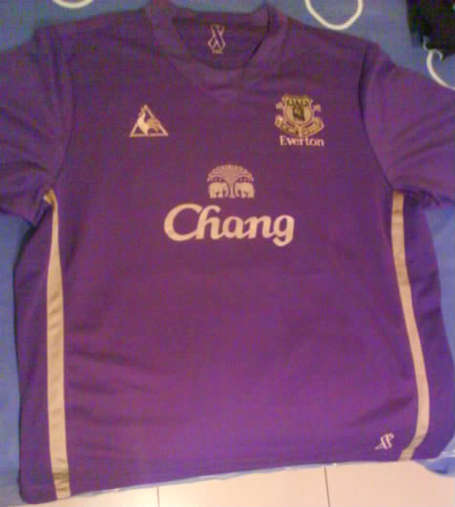 The month ended with a battling draw against Aston Villa. These two clubs have produced some thrilling games in recent years but this contest was more a battle of attrition. A goal from Billy just before the break looked to have put Everton on course for a morale boosting win, but bogey man John Carew notched another goal against the Toffees just after the re-start and Moyes’ battle weary troops had to settle for a point.

After just one win from seven games in a busy October surely November would be better? Well, it didn’t start well as Benfica once again gave a commanding performance in a 2-0 win at Goodison - Everton were now playing for second place in their Europa League group.

The relief was palpable three days later when Everton grabbed their first league win since September with a 2-1 at West Ham, Louis Saha and Dan Gosling with the goals in the capital.

Second most predictable result of the season? A 3-0 capitulation at Old Trafford. Seriously the players may as well have just given United the three points before hand so we didn’t have to sit through another tortuous 90 minutes. But if we thought that was bad, worse was to follow four days later.

In a season that plunged to new depths on a weekly basis things reached a depressing nadir at the KC Stadium, where Everton put in a frankly pitiful display against Hull in the opening 45 minutes to go into the break 3-0 down. Two goals in a failed second half fight back weren’t enough to disguise a performance Moyes rightly labelled as his worst during his tenure in the club.

With Mersey rivals Liverpool up next you could forgive Evertonians for feeling a sense of dread. After a disastrous eight weeks that yielded just two wins and six defeats our only hope was that the ‘big game’ atmosphere would somehow rouse the troops in action. To be fair they did put in a much improved display, but such was the luck Everton were having at that stage of the season the ball simply would not go in the net. Meanwhile at the other end Javier Mascherano balloons a shot towards the corner flag only for it to deflect off Yobo, wrong foot Howard and fly into the far corner. It was one of those days.

As Liverpool fans celebrated the Blues, now a lowly 16th in the table, were seriously contemplating a relegation battle.Thankfully that wasn't to be the case.

Next time: Everton claw themselves back into contention.