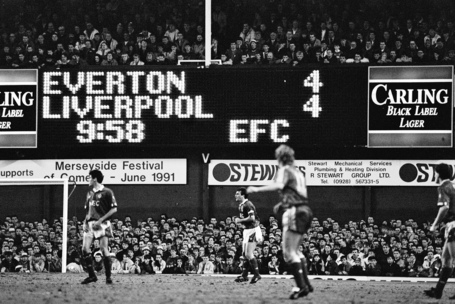 Little did Evertonians know as they walked to Goodison in February 1991 for a FA Cup 4th Round replay with Liverpool, that the game would turn out to be one of the best - if not THE best - Merseyside derbies ever.

By the early 90s Everton were a fading force in English football, despite winning the league just four years previously. Howard Kendall was back in charge for a second time and was desperate to bring back the glory days.

Liverpool meanwhile were also a fading force under Kenny Dalglish, but they still had a fearsome squad with the likes of John Barnes, Ian Rush and Peter Beardsley in their line up.

The first game at Anfield ended 0-0, though Everton felt they should have had a penalty in that match when Pat Nevin was brought down in the area. Liverpool began the replay the better though, as Everton struggled to contain their attacking players.

Beardsley - who would join Everton the following year - blasted the Reds into a first half lead they probably deserved following an error by Ian Snodin. Though there was no sign of the drama to come as the players went in at the break.

Liverpool were a force to be reckoned with though and Beardsley shimmied past two players before blasting the ball into the top corner from 25 yards a few minutes later.

Liverpool were threatening to run away with things before Everton suddenly bounced back when an error from Bruce Grobbelaar allowed Sharp to grab his second.

The lead didn`t last long though, The topsy turvy nature if the game continued when Ian Rush - the scourge of Everton defences throughout the 80s - headed the Reds into a 3-2 lead.

That looked to be it, Everton huffed and puffed but couldn`t find a way through the Reds defence, depsite the late introduction of Tony Cottee.

Deep into injury time however, with hope virtually lost, Neil McDonald`s long ball took a deflection and beat two Liverpool defenders before eventually landing at the feet of Cottee who slid home the latest of equalisers to send Goodison crazy. I will never forget Matin Tyler`s commentary: "Cotteeeee!!! Threeeeee!!! Threeeeeeeee!!!!!" 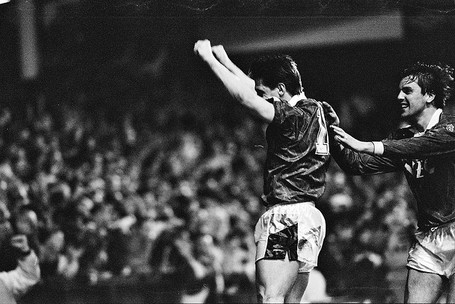 Extra time began and again Liverpool went ahead (again) with the goal of the match. John Barnes had the ball on the left touchline before cutting inside and bending a 25 yard shot that arrowed past Southall and in off the far post.

Game over? It looked like it as the seconf period of extra time began. But another error in the Reds defence allowed Cottee to sneak in and once again draw the Toffees level.

Goodison could scarcely believe it and come the final whistle, against all the odds, Everton had forced a second replay (penalty shoot outs only came in a few years later).

It all proved too much for Reds boss Kenny Dalglish, who quit the week after the match. A toss of a coin decided the venue of the second replay, with the Blues winning the right to host it at Goodison. The game was less eventful, but no less passionate as Dave Watson`s first half strike sending the Blues through to the 4th round.

An epic series of matches had just occured, producing the very best these local tussles have to offer. It will take something very spectacular to beat the events of that chilly Febraury evening in 1991.